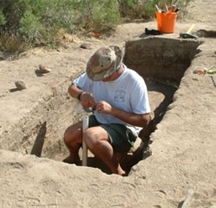 The 2003 UCCS field school took place on the United States Forest Service's Comanche National Grassland, along the Purgatoire River, south of La Junta, CO. The goal of the excavations was to investigate the homestead of the Lopez family, who settled in the area originally during the 1870's. The accompanying documentary record of and by the site's occupants is unusually rich, but is only one of several data sources with potential to tell us about their lives. Research questions revolve around market participation and the construction and manipulation of ethnic and gender identities. The site consists of the foundations and remnants of adobe walls of several buildings, including what may be the family home and an enclosed plaza. Excavations in 2003 focused on the area around the plaza and an attached block of rooms. A significant number of artifacts were recovered including two coins, a number of brass shell casings, a decorative bakelite woman's hair comb, and farm equipment. The canyons in this area are full of both prehistoric and historical archaeological sites, including spectacular rock art, to which we take field trips in the evenings. The Lopez site will be the location of the 2005 field school, as we continue research there.